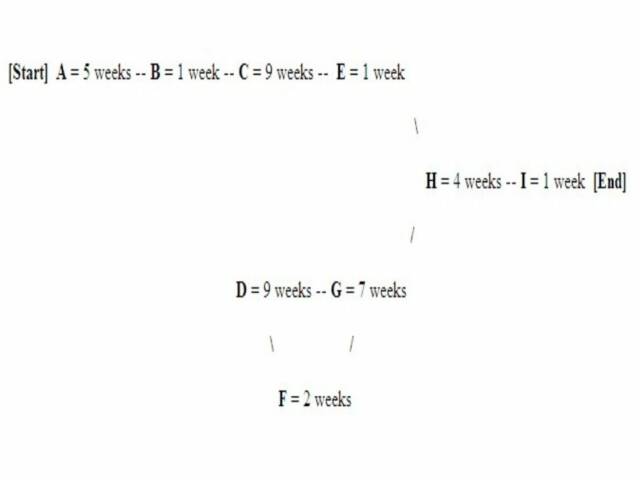 The longest path through the project is called the critical path.  In the example given, that would be from point A to point I.  You can see by this chart that you can do certain tasks concurrently.  Since you can do certain tasks concurrently, the total elapsed time would be 21 weeks; even though the total project time is 39 weeks.
PERT (Program Evaluation and Review Technique) is like CRM but the major difference is PERT enables you to make an optimistic, pessimistic and best guess estimate of the time it will take to complete each task of the project.  A PERT chart is a project diagram consisting of numbered circles or rectangles representing events, or milestones in the project linked by directional lines representing tasks in the project.  The direction of the arrows on the lines indicates the sequence of tasks.
Gantt Chart is used in project management to plan and track the progress of a project. Time is indicated as columns across the chart, with individual tasks represented as bars. The length and position of the bars shows the start date, completed days, and remaining number of days associated with the tasks. 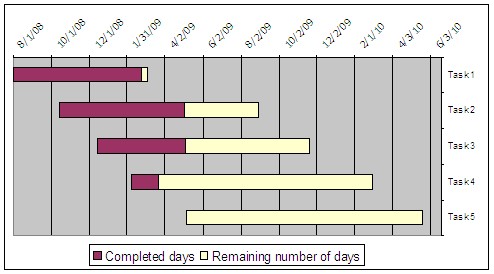 Decision tree is another visual flow chart tool.  It is like PERT, however, it lets you consider choices and risk.  It can help when deciding between different options by projecting possible outcomes.  It gives the decision maker an overview of the multiple stages that will follow each possible decision.  Each branch shows the probability of the outcome.  The project, question or event is represented with a square.  The decision is represented with a circle.  Branches are represented by the choices that you have to make.  The probability of each option is shown above each branch.  The two or more branches that sprout from the same node must all add up to 100%.  For example, if one decision circle has two options with one branch with a probability of 30 percent, then the other branch probability must be 70 percent.  The probability percent is based on facts that you have determined, or have been given.  You need to have sufficient data to best utilize the probability part of this tool.
Example – Decision tree.  A simple analogy based on the decision on whether to invest in an online training program: 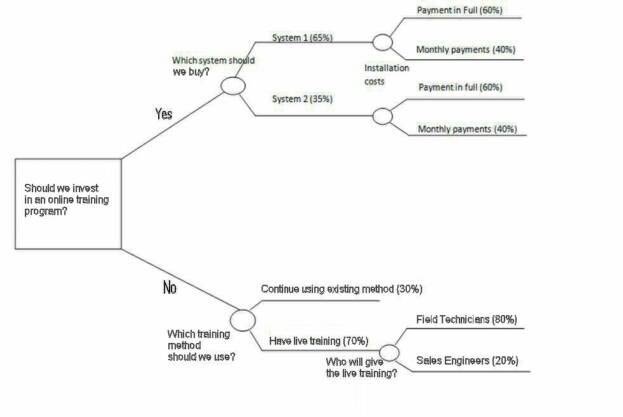 Once you have created the task sheet, you would make a chart that visibly shows each task in relationship to each other, and in order.  In this case you would separate what would be facilities related, which is getting the office space ready, and what would be product related, which is getting the phones, staff and training.
Example – Basic CPM chart
There are software tools that are excellent for planning and scheduling projects such as Microsoft Project.  There are also excellent software tools to create flow charts like Microsoft Visio.  If you are going to be heavily involved with project management duties and/or process documentation, these two tools are a must.  It is also suggested that you take a separate project management course.
Here are a few other Project Management Tools:
Example – Basic Gantt Chart 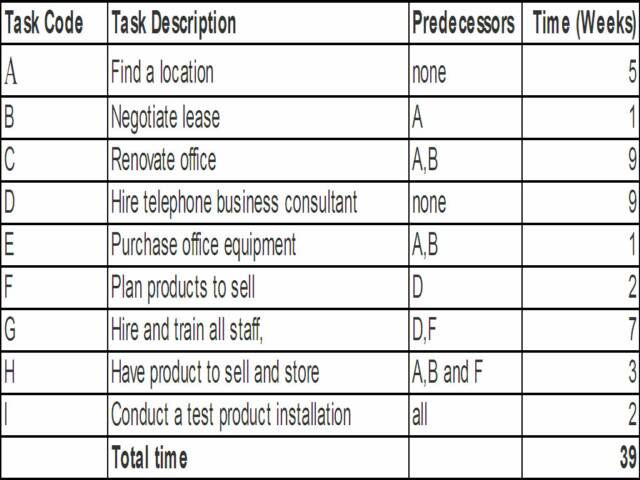 Cost-benefit analysis is used to see if an investment is worth pursuing.  You are measuring the benefits expected from a decision, measuring the costs associated with this decision, and then see if the benefits outweigh the costs.  Most businesses have both fixed costs and variable costs.  Fixed costs remain the same no matter how much the company makes or sells.  Some examples would be the rent on a building, the insurance, exempt salaries, or the lease of a copy machine.  Variable costs change with the company’s production and sales volume of a unit.  Some examples would be the cost of materials, delivery costs, compensation of the sales team, salaries of non-exempt workers, or the cost of paper and ink of a copy machine.  If the benefits outweigh the costs based on analytical data, then you could go ahead with the planned course of action.  A good tool to use would be:

A simple example would be if a copy machine is leased for $8,000 per year (which is the fixed cost) and you sell the copy for 10¢ (Selling price) but it costs 3¢ for the paper and ink per copy (the variable cost), the result would be:

If you are looking at two comparable pieces of equipment, you can use:

Another example of cost-benefit analysis:

The customer operations manager is deciding whether to implement a new online training program that would cover approximately 33% of the current live based training.  There is no budget to hire someone for this job specifically, so a decision needs to be made whether it is worth using an existing staff member to work on this project.  A new more robust computer and training software will need to be purchased.  Sales and Support will need to be trained as well as the existing customer base.  Some production work will be lost due to pulling one person off of their normal duties to work on this project.  Some of the work will also be outsourced.

Here is the cost-benefit analysis used to determine if the project is worth pursuing:

With this analysis, a decision based on facts, not just speculation, can be made.  If needed, this cost-benefit analysis can be given to upper management to evaluate.

Critical Path Method (CPM) will help you plan and coordinate the tasks and activities in a project.  CPM analysis requires that you first determine all of the steps necessary to complete the project.  You then prioritize based on the steps that are dependent on others steps being completed first, as well as those that can run parallel to other tasks.  It is one of the basic tools to use in Project Management.  Project Management is the planning, organizing and managing of allocated resources to bring about the successful completion of a specific project.

Lets say you are planning on opening a telephone installation business and already know the main tasks needed to get started.  You would assign a code based on each task and put them in order.  The order would consist of the task that needs to be done before you can do the next one (predecessor), and how long you think each task will take.

The text of these materials, or any part thereof, may not be reproduced or transmitted in any form or by any means, electronic or mechanical, including photocopying, recording, storing in an informational retrieval system or otherwise, except for students own personal use. The author does specifically disclaim any responsibility for any liability, loss, or risk, personal or otherwise, which is incurred as a consequence, directly or indirectly, of the use and application of any of the contents of this course.
© 2009-2021 MasterClassManagement.com  All Rights Reserved

Page 100
Click the icon to the right to download this file  >>>
Once the file is open, you can save it like you would any other file.